What's on the Menu this week?

Well, first of all, I need to say a very Happy Hello to my three new followers. What a surprise to find the number has increased. You are very welcome, and I hope you find something to interest you here.

My healthy eating campaign wasn't great last week - and I forgot to weigh myself this morning! - but I enjoyed myself immensely! Our party on Saturday was fun, and although there was quite a long time at the beginning where there were two guests and a lot of awkward silences, things got better. Perhaps predictably, there was a gradual separation so we got English in one room and French in the other, but I think everyone enjoyed themselves. The punch-like drink that we made went down very well - and rather too easily!
It contained 2 litres of ready-made Sangria, 1/2 a bottle of "Ambassadeur" (sherry-like apero), a bottle of red wine, 20 cl of Poire Willem eau-de-vie, a couple of shots of vodka, a carton of orange juice and a carton of cranberry juice, plus chopped up fruit. It looked very murky and sludgey, but it tasted good! No, I didn't really get very tipsy at all, despite drinking lots of fruity sludge! So the cats were safe, and nobody woke up wearing a traffic cone.

There was lots of good food, but I feel I should mention Michel's salad. He and Monique couldn't come, but he still insisted on making the salad. It was layers of chicory, avocado, pink grapefruit and crab-sticks - I wasn't convinced by the mxture, to be honest, but it was delicious! And it was typical of his generosity to insist on providing it (plus a bottle of grapefruit wine and a bottle of peach wine as well!)  even though he wasn't coming to the party.

So, back on the wagon today! 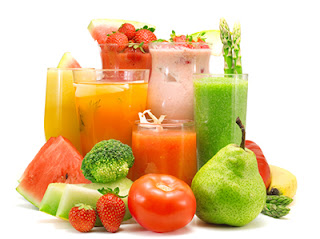 MONDAY: Hairy Vegetable Jalfrezi, with rice. The recipe in the cook book is for chicken jalfrezi, but I'm going to use aubergines, mushrooms and courgettes instead of the chicken. Otherwise it will be the same recipe. I'm doing this to cut down on the amount of meat that we eat.
As an aside, I think that is a downside of the otherwise wonderful Hairy Dieters: almost all the meals are meat based. I know that this is part of their "style" - hearty "British" cooking, but, in the current economic climate, I think more people are trying to cook with less meat, and this would have been an extra selling point. But that's only my opinion!

TUESDAY: Today we're having Hairy Cajun spiced chicken and potato wedges. Or possibly turkey, depending on what I buy. We'll have this with salad, as the recipe also includes a chive dip to go with it.


WEDNESDAY: I think I'd planned to have this recipe once before and not quite got round to it. It's Roast fish with Parma Ham & Peppers I'm using pollock fillets that I've got in the freezer. It looks a really easy recipe that's quite quick to prepare and cook.


THURSDAY: Baked potatoes with home made coleslaw and some grated cheese. Not too much cheese. I might make up a cheese-and-onion-and-light-mayo mix to make it go further.

FRIDAY: Hairy Mushroom risotto I can't find a link for this recipe. It is, in fact, a recipe for chicken and mushroom risotto, but I'm missing out the chicken again. Basically, make up your risotto, as you would normally: fry onion, garlic and chestnut mushrooms, add arborio rice (35g per person.) and add chicken stock. Add some dried wild mushroms which have been soaked for about 30 minutes. To make it creamy and delicious, stir through a spoonful of low fat creme fraiche and about 10g parmesan (for 2 people).
If you want to add chicken, the Hairy Dieters suggest one breast for 2 people, gently poached in the stock before you start the risotto. Then slice it into strips and add with the crème fraiche, making sure everything is heated through.

SUNDAY: Hairy Lamb Tagine .
The dish itself is named after the original  dish in which it was cooked - the traditional tajine (or tagine) pot is formed entirely of a heavy clay, which is sometimes painted or glazed. It consists of two parts: a base unit that is flat and circular with low sides, and a large cone or dome-shaped cover that sits on the base during cooking. The cover is so designed to promote the return of all condensation to the bottom. With the cover removed, the base can be taken to the table for serving. They are rather lovely, but I'm not sure it would fit in my oven! 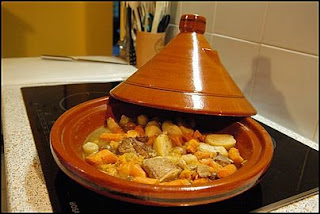 source
I might try this in the slow cooker. Several bloggers have said that it worked well for them - although the sauce may need to be transferred to a pan to thicken it on the stove top.


Nancy- I'm glad you liked the sound of the salmon dish and the cake. The cake was really good - I topped it with some caramel sauce and coconut which made it very yummy, although, in my opinion, it was a bit dry. Others have disagreed with me though. It certainly isn't a dieter's cake though! I'm not sure it followed the "pound cake" rule of 1lb of each ingredient either, but it was rich and tasty.

Fishcake Random - Thanks for getting in touch about the prize. I hope you got my email, but if not, I've now added my email address to my profile.
Mags - I'm waiting to hear from you about your win!


* * * * *
So, there you are, dear friends. Next week's menu planning. I hope you might find something new here that YOU might like to try. Let me know if you do! 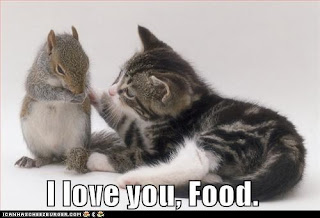