This is an adaptation of what was a really complicated recipe. You don't need an oven proof frying pan, but what you do need is a baking tin/roasting tray that can safely go on the direct heat of the hob and in the oven. I guess you could make the caramel in a pan and then pour it into a baking tray of some type. Your puff pastry sheet needs to fit snugly into this final oven proof tin. I used one of these:

but slightly less shiny! In fact, mine's non-stick, which may be why the Tarte Tatin wasn't the disaster I thought it might be.

110g caster sugar
40g butter
several apples
cinnamon
ready made puff pastry.
My apples were a mix of sweet Ariane apples, which were going bad (so I cut off the bad bits and peeled the rest) and wrinkly apples from last year (no idea of the breed) which were impossible to peel, due to their wrinkliness. So I didn't.

Pre heat oven to about 180°C
Core the apples and cut into thick slices. Sprinkle with cinnamon.
Melt the sugar in the baking tin/ovenproof frying pan over a low heat until bubbling. I stirred it a bit before vaguely remembering hearing on The Great British BakeOff that you shouldn't stir sugar that you're caramelising. So I stopped, and just shifted the tin from side to side, until the sugar was going brown and bubbly.

Remove from the heat and add about half the butter. Stir gently.
Then working fast but carefully (that caramel's hot, you know!) lay the apple onto the caramel base. This will be the top of your tatin, so try to do it prettily.

Cut the remaining butter into smallish chunks, and tuck the pieces of the butter among the apple slices.
Lay the puff pastry on top, tucking the edges down the sides.
Put in oven for about 35 minutes - or until the pastry looks cooked.
Then turn out onto a large plate - put the plate over the top of the baking tin, and with one swift sure movement, turn the whole thing over so that the tarte tatin lands on the plate. As I found out to my cost, the plate should be quite a bit bigger than your baking tin, as the caramelly juices are now very liquid and liable to spill out over the kitchen surfaces, the floor, the oven gloves that you're wearing because everything's hot and your clothes if you're not careful. 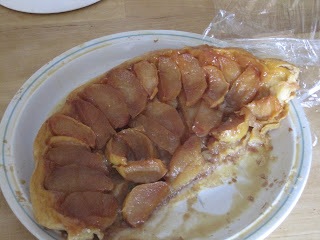 I rarely take photos of the food I make - mainly because I find eating it more interesting than photographing it! - but here we have a photo of half the Tarte Tatin from yesterday. Not the prettily laid out apples and the plate that is evidently just the right size for the tarte, thus contributing to the Great Caramel Flood Disaster of the night before.

So there you are! Much easier than the complicated recipe that I found, which made it sound like it was a dessert that took hours of careful faffing with different amounts of sugar and butter.

Finally I want to share an email that I received from the author of the French blog I directed you to re: Les Restos de Coeur. His (her?) English is amusingly bad, but I'm not mocking him (her?) at all. I'm laughing at the title by which he (she?) addressed me. As you know, my moniker is Fat Dormouse, and so I was addressed as:


Goodnight Fat
I love it! "Good night Fat"!!!! Big grin.
Goodnight Fat
I can not put a comment on your blog so I will leave you in email ...
Thank you for putting the link to my blog, I'm glad you're interested and thank you to contribute to good deeds french!
My English is even more terrible than your French
See you soon on our blogs
Laurence
Labels: recipe