Food for this week (I've got fed up of clever "River Cottage" titles!)

Last week's highlights included - well, nothing, really. Everything was perfectly edible, but nothing really stood out. Except maybe the cheese-and-onion pasties, which were delicious hot from the oven. I've not felt very enthusiastic about anything this week - a combination of early mornings and low level back pain has made me a bit "Meh"-ish this week. I've not really fancied cooking.
And what pissed me right off was my Adventures With the Chicken Breast. I bought a chicken breast (to make Coronation Chicken pasties this weekend) in Grand Frais - a fresh produce shop. It's alwas got a great selection of fruit and veg and good looking meat too. As I wasn't buying much meat, I thought I'd get my large, free range chicken breast there. So I asked for one at the meat counter, the butcher wrapped it and gave it to me.

When I got to the checkout I realised that this chicken had been fed caviare and champagne all its life and had slept on satin sheets: at least, I hope so, judging by the price.Still, I managed to justify it, thinking, "Well, it's a big chicken breast; I'll be able to get 4 pasties and a couple of sandwich fillers of Coronation chicken as well. That's only ---€ per meal!"
So, on Thursday evening, as I was roasting the squash to go with the quinoa, I thought "Be thrifty! Use the electricity to cook the chicken breast too! Ready to make the pasties! Yay for thriftiness!" I took the squash out to mix with the leeks and quinoa, and left the chicken breast in the oven to catch the last vestiges of heat. And I forgot about it. There it stayed, from 7.00 pm on Thursday evening, through the night, and all through Friday - which happened to be the warmest day of the year so far, reaching 15°C here. Now, my food hygiene isn't great, but I would be very dubious about eating a cooked chicken breast that has been out of the fridge for 24 hours. So, instead of us getting 6 meals from this expensive chicken breast, the Very Bad Kittens and Beautiful Pomme are going to get a Veritable Feast tonight! I'll have to try to remember to photograph them chowing down opn Free Range Chicken breast! Grrrrrr! Yay for Thriftiness, my left foot! More like Yay for Senior Moments!!!
BUT we did go to the cinema on Thursday! Our local little cinema (about the size of a multiplex "room") was showing "The Descendants" in VO (version originale), so we went along. SOURCE
It was quite empty until 5 minutes before it was due to start when a coachload of Lycéens arrived (aged between 16 and 18). They learned a lot of English swear words, I think (although they well have already known them!) - although I noticed they weren't all translated in the subtitles! Most of them were fine, although there was a group of young men two or three rows behind us who talked quietly throughout. I tried turning round and glaring, I tried saying "Chut!" but they took no notice. We gave them a Paddington hard stare when we left, but they were too busy rolling up their nicotine fix to notice.
Next week, they're showing "La Dame du Fer", so I think we'll go to see that too.

Today (Saturday) I've just made spicy (though Mr FD says it's not very spicy) parsnip and coconut soup for lunch. I used a jar of curry sauce that I've been hoarding and not using (due to its rather violent yellow colour. And the fact it's a French brand and I don't think the French can "do" curry) to add to the soup. I've kept some back to use in my pasties, which, instead of being jam packed with tasty chicken, will have a meagre filling of turkey escalope (just over 1€ at the Farm shop) and a lot of sweet potato! Oh well!
What else are we having this week? Lunches will be: pasties (x2), scone based pizza tomorrow, paté, maybe Coronation Turkey (if I can s-t-r-e-t-c-h the escalope), and cheese. There may also be some dhal left over which I can have: I'm not sure Mr FD would like cold dhal. However, the soup will help to fill Mr FD up: I'll only have it today, so it should do several lunches for him.
SATURDAY: We're having Lentil dhal from the River Cottage book, with Onion bhajis (home made! First time ever! Bought chickpea flour at Grand Frais!) and rice. I'm a bit nervous about the onion bhajis as I rarely "deep" fry (and in fact it's more like shallow fry in a wok) but I thought I'd be brave and give it a go. Mr F-W suggests cauliflower bhajis, but cauliflower is another vegetable I can take or leave. And, quite frankly, I'd rather leave it! I'm using red onions though, rather than the Spring onions suggested in the linked recipe.

Due to my computer playing silly Bs I didn't finish writing this post yesterday (it's now Sunday) so I can tell you how the dhal and bhajis went. The dhal was okay; we had it with hunks of bread. The bhajis were divine!! They were SO easy to make and served with a yoghurt dip as well as mango chutney, I'm afraid I ate them like a little, snuffly pig! I'd made them with a mixture of onion and grated courgette, and I couldn't get enough of them. I think I need to find a way of draining them better, as they were still a bit too greasy, but oh!
SUNDAY: Pork & Mushroom Casserole which I've made before (see post from 14th January). We'll have this with the not-used cabbage from the aborted stir fry last week (Good grief! That sounds most unpleasant!!!) and a jacket potato. (or maybe rice) As this is going in the oven, I'll probably cook the pasties at the same time, and maybe some flapjack too.
Eek! I'm very behind with my commenting - it's now next Sunday, and I've not yet comented on this Sunday. Sorry! Pork and mushroom casserole was as good as last time.
MONDAY: Noddy's Beany Banger Bake...this is one of the recipes from "Eat In" magazine, where we are meant to believe that Noddy Holder cooks many meals with sausages. Well, I did find this photo of Sir Nod on t'Internet 
so maybe it's not so incredible, after all. And here is the recipe! I'm adapting it slightly - using merguez sausages, and only kidney beans, and no treacle - but it should be basically the same. I might put a topping of sliced potatoes on, to compensate for the reduced starchiness from the lack of beans. 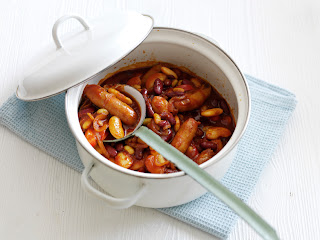 This was fine - a sort of sausage chilli. Nothing special, but certainly enjoyable.
TUESDAY: Now this really is a recipe I'm dubious about - and it's not from Mr F-W, this time! I've taken it from the magazine, and it is Oat and Chickpea dumplings I'm not sure exactly why I'm dubious, but there you go! Served with green beans and a tomato sauce, it seems to be very healthy and good for us! I note that these can be served cold with a dip...That might work for a packed lunch on Thursday for me. I'll think on that.

SOURCE as recipe
These were a very pleasant surprise! I jazzed up the tomato sauce (which, in the recipe, was basically a carton of passata) with courgette, onion and pepper, plus a dollop of sweet chilli sauce. I'll be happy to make these again - possibly when MiL comes to stay.
WEDNESDAY we're having Mr F-W's Pasta with spring greens, chilli and garlic. We've had this before but I'm sure we'll enjoy it again. Plenty of garlic and chilli, I think! I'll probably use fresh pasta to make it super quick, as Wednesday is my "drinkies night" with friend Alison
Doidn't fancy this in the end, so I made a bacony, tomatoey sauce with grated courgette to thicken it.
THURSDAY: For tonights dinner I'm making Lettuce, spring onion and cheese tart I've linked to this lady before, as she had a "River Cottage Week", so tried some of the recipes I'm using. She certainly seemed to like this, so hopefully it won't be a Hugh disappointment. I'll serve this with a jacket potato and coleslaw, and we'll have the leftovers for Saturday lunch with beans. 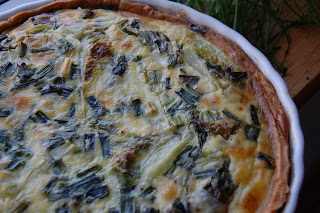 SOURCE
Oh! The Lettuce tart was surprisingly good! With coleslaw and a wrinkly jacket potato this was very delicious. I'd recommend this recipe. I didn't keep to Mr F-W's quantities: two eggs, less cream, more milk and a splosh of caincaillote cheese sauce made a good custard. It set perfectly well.
FRIDAY: For Friday, we'll have Mr F-W's Three-root Boulangère (this comes with a Dire Warning about the celeriac) with garlic mushrooms (basically mushrooms baked with butter and garlic, then topped with grated cheese.) I'd like to use big field mushrooms, but you don't often see these for sale - not even in Grand Frais! I suppose the idea is that you go out and forage for them yourselves! This was also fine - nothing special, but enjoyable. I made the garlic mushrooms in a sauce of cream and the last splosh of caincaillote sauce. This was a good idea as the boulangere needed something with it. It wouldn't have been much of a meal by itself.

I hope that, as usual, you may find something interesting - or it may encourage you to try one of the recipes. I'm not sure how much healthier we are through this regime...Mr F-W does still like his cream etc. and though I use lower fat alternatives, it still isn't exactly "diet" food! Mr FD is looking a bit larger-than-usual at the moment, although he'll slim down through the summer with his cycling...and I'm rather too sedentary for my own good. My bad back is a reason (not an excuse) a the moment, but I must be careful it doesn't become an excuse (not a reason) in the future! With a couple more sessions at the Kiné, I should see some improvement, but today it feels very stiff and sore.
Labels: food menus River Cottage