I've done some crafting - an 18th birthday card for my niece in Canada - which I forgot to take a photo of. ("Of which I forgot to take a photo"? - That should be the correct form but no-one says that now do they? Should I, as an English teacher, teach the correct form, or the vernacular?) I think I may tell you more about my crafting endeavours over at The Teapot. You'll need to pop over there.
(but not quite yet - give me a few hours to post!) 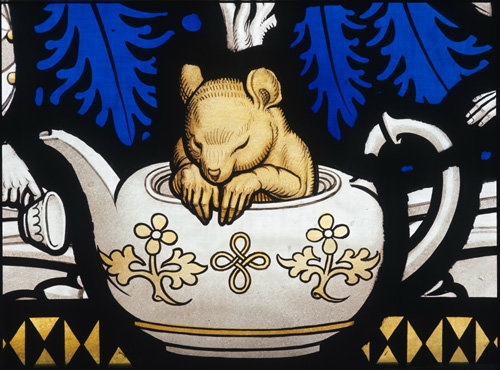 (Picture of one of the Lewis Carroll stained glass windows at All Saints Church, Daresbury)

Our food this week has been nice. The concoction that I made on Thursday was much more enjoyable than I imagined it would be...I had 250g of beef mince, a packet of microwavable "Mediterranean rice", half a jar of tomato sauce and half a dead-ish aubergine. I browned the mince, and an onion, and added a few wrinkly mushrooms, and the tomato sauce. Meanwhile I sliced the aubergine softened it in the oven for about 10 minutes. I microwaved the rice and added it to the beef mixture. Then I layered it in the slow cooker and gave it about 3 hours on "High". Finally I made a cheese-and-mustard sauce which I poured over the top, finished with some breadcrumbs and grated cheese. 15 minutes in the oven and there you go! Dinner for three plus leftovers (with a bit of padding) for another 2 dinners.

This week I have planned:
TODAY: Minted lamb pastieswith HM coleslaw (I have an enormous white cabbage to use up!) and salad. Possibly some potato wedges too, but there's the pastry already so we probably don't need potatoes too. 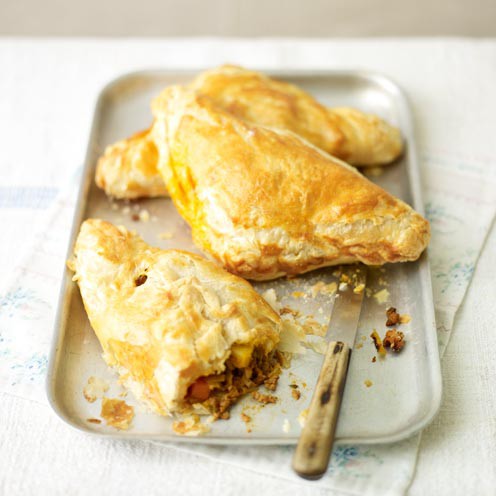 SOURCE
SUNDAY: Thai Chicken & Coconut Rice which looks quite easy to make. There's no vegetables involved in it, so I may make a salad to start, or a chicory-and-orange salad to go on the side.
MONDAY: Chicken and pepper pasta Mr FD is in charge of this as my teaching commitments mean I don't get home until nearly 7.00 on Monday evening. 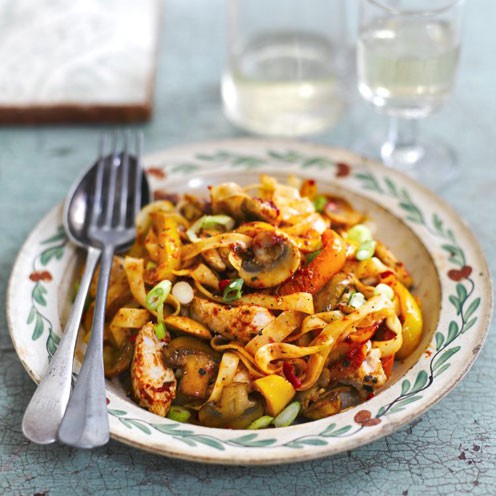 WEDNESDAY: Pepper crusted salmon with garlic chickpeas Mr FD is in charge of this one, as I'm at my dance group in the evening. He's cooked it before. The chickpeas are lush, and would complement any vegetarian quorn-y fillet or whatever, should you be vegetarianly inclined.

THURSDAY: My friend Caireen will be joining us for dinner, as she and I are flying to Munich on Friday for a conference-y/workshoppy type thing. She's staying overnight as I can pick her up from Clermont on Thursday afternoon, and we can drive to Lyon airport on Friday morning. She is vegetarian, so we'll have a vegetable curry, with naan bread. I have various curry sauces/pastes lurking in the fridge so I'll use one of those and a load of vegatables. Nothing sophisticated, I'm afraid!

Mr FD will be fending for himself on Friday & Saturday evenings, but I would imagine that a pizza from the van may feature on one evening, and something from the freezer on the other.

I am becoming very aware that the top shelf of the fridge has been taken over by jars and I don't really know what's there, or how old it is. I think there is a half used jar of mincemeat that could be coming up to its 2 year anniversary...My designated job for the weekend is to clear out the fridge, give it a good clean and toss/use up the jars...That may mean a marmalade cake as I think there's a couple of jars of marmalade too. Here's a link to an article + recipe from Nigel Slater - I chose this link rather than a straight-to-the-recipe link because I think he writes about food so well.

DRUM ROLL.... The phantom stair pisser has been unveiled! We have discovered, thanks to the wonders of modern technology (our friends' wildlife camera) that it is beautiful little Bib who appears to be the pisser. It is happening infrequently, so we are thinking that either she has been frightened by Millie and is marking territory, or that she doesnh't consider the litter trays to be clean enough, or that the door to the toilet where the litter trays are has been shut too much for her to open it. We are keeping the camera running, and endeavouring to make sure that other possible factors have been eliminated.

No-one has taken me up on my offer of a zentangle. Sad face. It was a genuine offer, as I like to have a reason to do these things, rather than just plucking a subject out of mid-air. So do please get in touch if you'd like a zentangle.

Or if you'd like to receive a letter. I'm trying to write more letters, since joining Silver Pebble's Letter Writing Exchange. Sadly the two people I was assigned (one to write to, one to write to me) don't seem to have liked my letters very much. My receiver hasn't acknowledged my letter, even though it's been about two months since I sent it, and I wrote back to the person who wrote to me, and she hasn't replied, and it's been almost a month. Still...I suppose people have lives and it's difficult to find the time to write a "proper" letter.

So, if you'd like a letter, send me an email with your address, and I'll happily write one to you. I'm running out of people to write to! I hope everyone has a good week. I'll try to get round to a blog post when I get back from Munich, but I'm not promising.
Labels: Fat Dormouse food letter-writing life menus this 'n' that