Hello dear Peeps, from a slightly subdued Dormouse Towers. Of course, after Friday's terrible events, one cannot help but be subdued. I wrote a post about it over at The Teapot.

But this is life as we have to live it: the terrorists want to sow fear, and panic and terror. They want us to live un-normal lives, terrified of what could happen to us. And while me continuing to write my blog in a cheery manner probably won't strike much of a note with terrorists from I.S. it does at least mean that I am showing that I know that Life and Light has conquered Death. Which leaves me free to blog about food...(!!!)

I have just realised that it is TWO WEEKS since I last posted!! I am sorry. I went to a Craft-and-Leisure show last Saturday, to church on Sunday morning and then ended up being rather busy preparing lessons on Sunday afternoon. The Craft fair was quite good, and I ended up buying my Big Shot as planned. Plus various embossing folders and cutting tools. I'm still very much a beginner, but I look forward to practising lots!

Here are three cards that I've made so far: 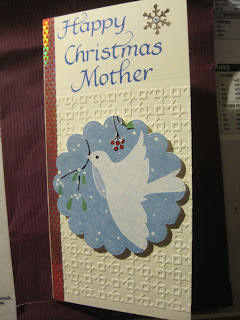 This is for someone at church - I used the Big Shot to emboss the card, and also to cut out the dove from an old card from last year. I'm well aware that the writing is horribly wonky, so I'm going to redo the card after I've finished blogging. 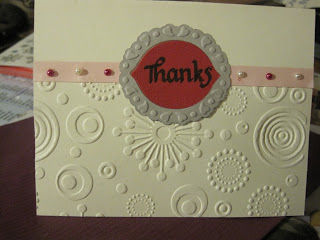 Another embossed card, with the little sentiment cut out with another cutting die. This one went to SiL to thank her for my birthday present, and the following one went to my mum whose cheque made all this possible! 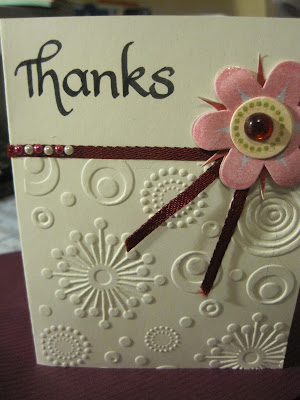 I'm reasonably pleased with these, and will be continuing to play and experiment! Anyone with Big Shot experience, please do contact me with suggestions for projects or must-have tools.

Food this week has been reasonably simple, so I don't need to catch up really. Yesterday's planned dinner was abandoned for a pizza from the van...I ate about 2/3 of mine and finished it for lunch today!

Planned for the following week:
TODAY: Slow Cooker Pork Catalan - from an ancient (1970s) slow cooker recipe book. I can't find a recipe to link to, but it's basically pork casserole. I'm not sure what makes it "catalonian" except the green pepper (I used a red one!) and the addition of some olives. Still, hopefully it will be nice whatever it's called!

MONDAY: Sweet Potato and Spinach Pie - not quite this recipe, but nearly. Mine has no cream, and has tomatoes sliced into it, for moisture. Mr FD will make a tomato sauce to go with this, and we'll have it with Jambon Persillade

WEDNESDAY: Turkish Meat Loaf - again from the 1970s CrockPot cook book. It's Turkish because it involves a daring teaspoon each of cumin, cinnamon and coriander! To be served with some chips and a tomato-and-red-onion salad.

THURSDAY: Pasta with bacon and caramelised onions This was Saturday's planned-but-abandoned-for-pizza meal. We have feta to use up. 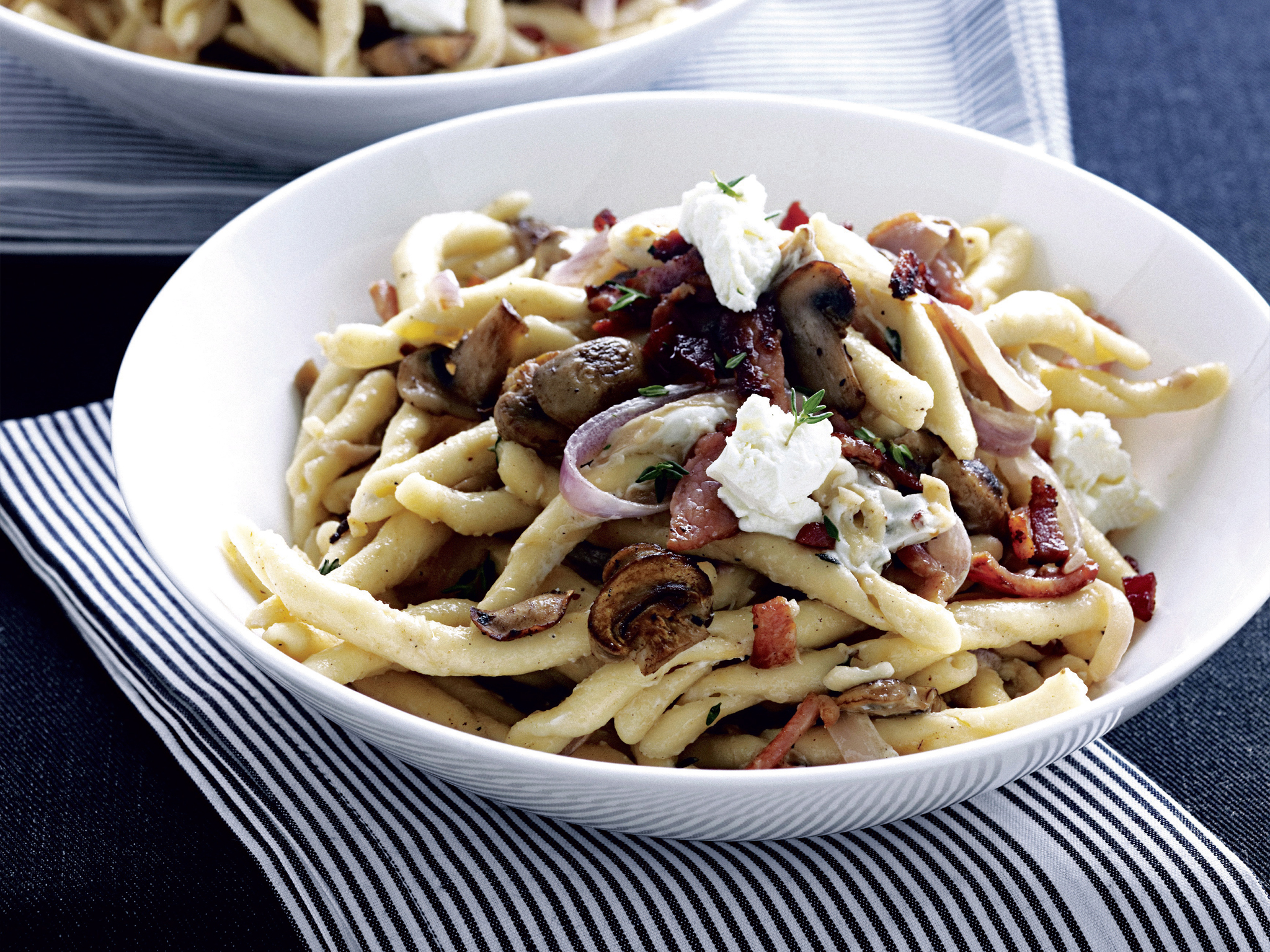 FRIDAY: Turkish Meat Loaf in some guise or other. I'm thinking possibly with baked potato and coleslaw. Or maybe with baked beans (not very Turkish!!) Ooh, or maybe potato gratin... As Mr FD is preparing this meal it will be his choice (unless I feel generous and make the gratin on Thursday)

SATURDAY: We may be going to Lyon to have a meal out and to see "Spectre". We had planned to go today, but felt that enjoying a film full of explosions, gun shots and killing would not be appropriate after Friday. And if we don't go, there's a couple of ostrich steaks in the freezer we can have!

source
SUNDAY: It's Thanksgiving Dinner at church. Mr FD isn'ty going, so he can have something from the freezer for his dinner. I will be having turkey-and-all-the-trimmings. I will probably take carrot cake as my dessert offering. 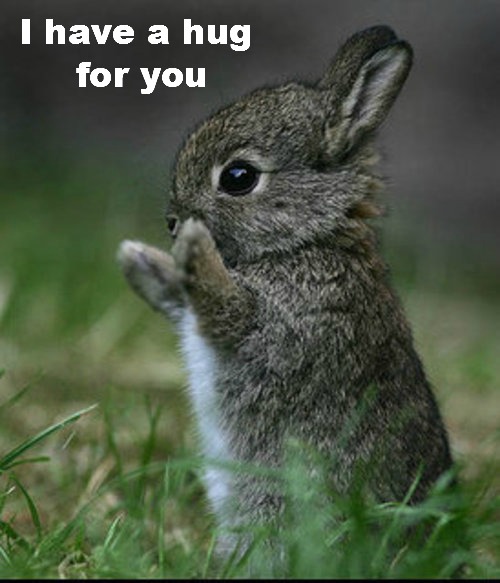 PomPom: It sounds like you had a good time in Mexico - I enjoyed reading about it. The stuffed peppers done in the slow cooker were very, very nice. Definitely one to do again!
Here is a Mexican cat just for you: 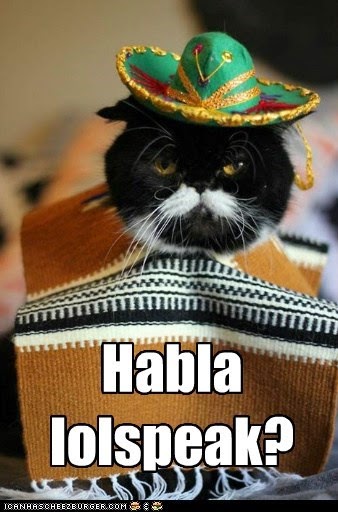 Jane-and-Chris: I almost always include LolCats in my posts. Two is the usual amount!!

Cro Magnon: You must try pulled pork!! It is very good (although I felt the spice mix was a huge disappointment and much prefer this recipe.)

Trish: I too was glad I didn't have a heart attack!! I did feel a bit as though I had wasted people's time, but changed my mind when I heard yesterday about a woman in the village who had similar symptoms, put them down to indigestion and thought about going to see the doctor the next day if it wasn't better...but didn't make it through the night.

* I have a new Russian Follower, but every time I try to find out where his/her blog is, my Follower box goes odd. But can I offer him/her a
большой толстый Соня Добро пожаловать (roughly translated as "big fat dormouse welcome!!!)(according to Bing Translator, that is)
Labels: Crisis food LOLcatz menus this 'n' that