Pausing in Advent to bake

I did some Christmas baking yesterday. Because we're away from next Friday, I'm not doing much, but I'd bought a jar of Robertson's mincemeat from an English bookshop/grocerswhen we were in Pezanas in September, so I at least wanted to make mince pies! I mixed the mincemeat with some more raisins and some peach brandy to make it go a bit further. Despite my good intentions ("I shall tidy up as I go along") the kitchen ended up looking like a bomb had hit it 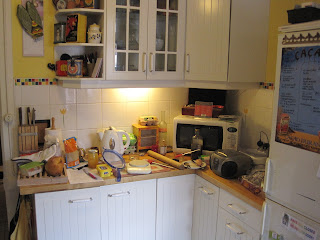 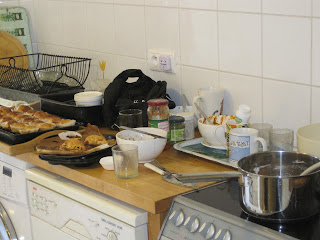 But I enjoyed listening to my Christmas CDs - A Symphony of Carols, and John Rutter's Christmas carols, seen in the following photo of the tidy kitchen with mince pies: 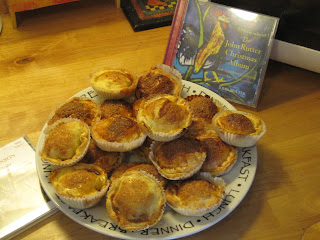 I also made the dough for my Christmas cookies, but that needs to chill overnight, so I think I'll be baking those tomorrow. I remember how mum used to always have a flurry of baking before Christmas: she was a good cook, and made loads of mince pies, and florentines and, of course, the Christmas cake. However, she wasn't very good at icing the cake, but she had a friend who was. Every year, it would be a special evening when Dorothy and Kathleen came to ice the cake. Dorothy is a relation (second cousin?) of mum's, and Kathleen was her friend who had MS. They worked together, and lived near each other, I think,and Dorothy helped with Kathleen's care, when necessary. Every year they'd come for tea, and then ice the cake beautifully. It was always a sign that Christmas was near! Dorothy is still alive, though in poor health now, but Kathleen died many years ago.

I tried to find a photo of a similar cake to those I remember, but I couldn't. So here's a slice of cake instead!

Mum's Florentines were something else!They were a bit too "adult" for my tastes when I was younger, with dark chocolate, cherries and raisins...I can't find a recipe that looks like mum's though...hers weren't quite the cookie-type things that many of the recipes seem to show, but rather a light, almost meringuey texture of biscuit on top...All I can remember is feeling decadent and grown-up when I stole them (!) out of the tin!

And now, I guess my Christmas Cookies are becoming a bit of a tradition here. I posted the recipe (or rather a link to the recipe) a couple of weeks back. I hope yours turn out well, if you make them. And our other tradition is Mr FatDormouse's Panettone Christmas Pudding. Neither of us like Christmas Pudding, but this is a very popular alternative:

Cut the panettone into slices about 1 cm thick, and lay them, slightly overlapping, in a shallow ovenproof dish
Whisk together the eggs & sugar, & then add the remaining ingredients.
Pour the mixture over the panettone.
Bake in a preheated oven (200°C/400°F/GM6) for 20 minutes or so.
Serve warm but not piping hot.

Other recipes suggest adding chocolate chips, caramel sauce etc. but frankly I think it's fine as it is. Maybe use a panettone with raisins, if that floats your boat.

We're leaving for the UK on Friday, and I won't have access to a PC, so this is my last Pause In Advent post. I wish all my readers a very happy and blessed Christmas and a peaceful New Year. God bless.