Next Week from River Cottage

So last week certainly had some successes, but I think my favourite meal was the Patatas Bravas. That really was great, and, with the tapas-y type additions that I made, would be a good informal meal to have with friends. The fried chorizo was a tasty addition too.

This picture, entitled "Flemish Girl Feeding A Cat" appealed to me, as our cats are inveterate beggars of food. The girl appears to have been plucking a chicken, when her Mistigris (which I've discovered is a French term meaning "Pussy Cat". I love it, and may well use it for the name of our next cat, especially if it is grey.) arrived. This is SO like Millie - I only need to start chopping anything in the kitchen, and she arrives, on litttle fog feet. to beg or to steal some titbit or other!
I'm starting an experiment this week, (or maybe I will develop it this week and start next) regarding lunches. As I said last week, I just buy "stuff" for lunch with no real planning, and sometimes I buy way too much, and sometimes - like this week - I buy far too little. So I'm going to plan my take-to-work lunch more carefully, and write on the fridge 5 suggestions for Mr F-D to choose from. I'm also going to try (tho' who knows how long this will last!) to make 4 pasty type things each weekend, to give something other than bread for lunch. This is because I've started having something-on-toast for breakfast, (rather than porridge, as I was feeling a bit sick of porridge.) and don't want to have bread for 2/3 of my meals. So, lunches next week are: roast veg & cheese with salad, 2 x cheese and onion pasty, meatball sandwich with pickle, and something with eggs (sandwich for me, possibly omelette for Mr F-D) Tomorrow I'll make a butternut squash and coconut soup to have as well.
Other meals:
SATURDAY: Roast leeks with Romesco sauce, bread and cannelini bean hummus. This blog gives more details of how the dish should be made with thick spring onions, but I'm using leeks, and not really chargrilling, but roasting them. Hopefully they'll still be enjoyable. As Mr F-W suggests this dish as part of a mezze, I'm going to also make cannelini bean hummus to try. I can't find a recipe for this - but it's a basic hummus recipe, made with cannelini beans, rather than chickpeas. However, I could have sworn that the recipe said I could use peanut butter instead of tahini, but it doesn't say that now. Hmm. Very strange.

SOURCE
Sunday addition:The leek and sauces was pleasant, though I think it wasn't really hearty enough for Mr F-D who had been out cycling and was therefore rather hungry. We have plenty of bean hummus and Romesco sauce for lunch today. I think the Romesco sauce needs to be poured over something though - but chips (my first thought!) seem a bit much for lunch! Hmmm, I'm not sure.
.SUNDAY: Spiced fried chicken, sauté potatoes and salad. Or maybe sauté courgettes. This is from the recipe magazine, rather than Mr F-W. Basically, fry the chicken with cumin, cinnamon and cayenne. Then when cooked, add some almonds to the pan. Cook for a couple of minutes and serve. I wonder whether to roast the chicken, with the spices rubbed into the flesh - less oil/butter (as the recipe states 30g butter plus 2 tbsp oil)
I decided to warm the Romesco sauce up and use it with the spiced chicken - which I oven roasted in the end. Much less fat was used. I made creamy mashed potato, using the leftover filling from the cheese-and-onion pasties. In fact, these looked so good coming out of the oven that we had one for Sunday lunch, rather than what I'd planned!
MONDAY: Spaghetti Carbonara  but made with a mixture of low fat creme fraiche (not fromage frais) and cream cheese. And I'll probably use whole eggs so I'm not left with whites to use up!

SOURCE
The spaghetti (well, pasta spirals) carbonara were very nice. I threw in some leeks as well, so we got a few veggies in the mix!
TUESDAY: Sicilean meatballs. I can't remember where I got this recipe from, but it's in my handwritten recipe folder. Here is the recipe; it serves 2 people.
225g minced pork       20g grated parmesan
60g fresh breadcrumbs          2 tbsp chopped parsley
zest/juice lemon           1 egg
25g plain flour                        1 tbsp oil
1 large gless white wine         2 bay leaves
Mix pork, cheese, breadcrumbs, parsley, egg, lemon and a pinch of salt. Form into 8 balls. Roll in the flour. Chill, if you have time.
Heat oil and brown the meatballs. Don't move them about too much.
Add wine and cook for 2 - 3 minutes. Then add the bay leaf and enough water to cover the meatballs.
Simmer for about 30 minutes, until the liquid has reduced and the juices are syruppy.
Serve, as I am doing, with rice. Or pasta. And a green vegetable. SOURCE
The meatballs were as nice as expected. However, due to my rather too enthusiastic simmering of the juices, the sauce had practically disappeared by the time they were ready to serve! So I opened a jar of pasta sauce that I had in the cupboard and used some of that! I'll use up the rest as a pizza topping on Saturday lunchtime - I've planned scone base pizza for lunch on Saturday and Sunday.
WEDNESDAY: Cottage pie with a mashed potato and turnip topping. Do you need a recipe? I can prepare this before Alison comes down for her weekly apero, and just pop it into the oven. It's the last time I'll be able to do some preparation beforehand, as next week I'll be back to a full day's teaching, getting back at 6.15, just before Alison arrives. One of my students is preparing for her Bac Blanc (mock exam) so doesn't want an English lesson.

Interestingly, all the comments that follow, from French housewives everywhere, are positive. Unlike most of my students who declare that English cooking is crap!
Mr D wasn't well, feeling a touch of the gastro, so Alison didn't come and he didn't want cottage pie. So, as the mince was in handy burger form, instead of "en vrac" I had a burger, with a cheese slice, chippies and coleslaw (Myam,myam) while Mr D made himself an omelette when he felt like eating.
THURSDAY: Dammit, I am going to eat that Quinoa that I bought a month ago!!! But I'm going to try Mr F-W's "winter" version of the still-not-tried Courgette and Onion Quinoa. So we're having Quinoa with leeks and squash. Maybe that will be more successful!
It's Thursday, and I'm just off to start cooking this now. I'm also going to cook a chicken breast, ready for this next week's pasties which are due to be chicken-and-sweet-potato-in-a-mild-curry-sauce pasties. I hope they work - I'm making the recipe up as I go along, to use a cheap curry sauce which I bought in a fit of madness one day. I'm also planning to make curried parsnip soup, using some of the same sauce. I suspect it would be too innocuous for a real curry as it's made for French tastes.
OK, the Quinoa wasn't bad - a bit claggy, but OK. I added some parmesan, which gave it a bit more of a zing. But I'm really, really pissed off with myself about the chicken. I will tell you why in next week's post.
FRIDAY: Winter stir-fry with Chinese Five Spice. This includes Brussels sprouts, which are certainly not my favourite vegetable, and I may not be able to buy them anyway. If that's the case, I'll go for some kind of cabbage. 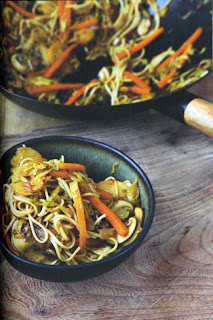 Someone has written about this recipe:
"Flipping superb! Who would have thought,  sprouts,carrots,parsnips in a noodle stir fry! Made mine using home grown sprouts onions garlic and chillis.Best recipe I've ever tried! Nearly decided on a chinese takeaway but glad I didn't! My missus quite likes Hugh and is now totally smitten after this recipe of his.Cheers" (I do have to admit to correcting the commentator's grammar!)
But, come Friday night and I really don't fancy vegetable stirfry. It isn't calling me at all. So I used the rest of the bolognese sauce (earmarked for tomorrow's pizza. We'll have "bits from the fridge" instead), the steak haché burger than Mr FD didn't have on Wednesday because he was a sicky-boy, some mushrooms from the planned stirfry and I made a pasta bolognese. That hit the spot, better than a veggie stirfry would have done. But I now have half a savoy cabbage to eat. That shouldn't be too much of a problem, I think..
So there we go. Next Week courtesy of River Cottage. PomPom came for dinner every day last week - does anyone else want me to meet them at the airport?!

PS I received my lovely giveaway present from Ang yesterday. I will tell you about it tomorrow, over at the View From The Teapot. But thank you, Ang.
Labels: life menus River Cottage